Here’s an old post I found on another one of my blogs. Somehow I just love how this ends, so I thought I’d post it here.

I am walking blindly
Looking nowhere
Knowing nothing,
But I am not lost
For there is nowhere
That I want to be
There is no place
To which I am going.

I had come
To know myself
As the road wound
Round and round
There were rare
Glimpses of good
But more a mask
I wore than true skin
For I had to hide
My beloved ugliness.

My dark deception
Led more astray
For a mask
Is always misleading
No matter how little
Is covered
But all realized
Sooner or later
The dark
Disposition
Of my tainted soul
And they took
The first train home.

So blindly
I stumbled and fell
But no mistakes
Could teach me
How to walk
Without falling
Or maybe I refused
To learn
And my stubbornness
My ideas of life
Kept tripping me
At every step.

So now I stand here
With nothing
No hopes
No dreams
Only compromises
With life
All my ideals
And beliefs shattered
All my hopes
And desires forsaken
I long for nothing now
Except solitude.

Alas, I know someday
I shall meet a fork
On this lonely road
And I will be forced
To choose between
Two roads of destruction
And tempted though I am
To walk away from both
I am only a blind beggar
Stumbling along the way
With no choice at all
For how are two roads
Each leading
To a different monster
A choice in any way?

There is a staleness,
Deep inside of me,
A certain rot,
That shows
In my actions,
And words
But I do not know
How to reverse
The effect of decay.

My mind
Has become moldy
Nothing works
I only think
Deep dark thoughts
Putrid, sour,
The stench
Becomes overpowering
The unnatural smell
Is that of my mind
Rotting away.

My feelings
Speak of decay
There is little
But black damp
Thoughts floating
Souring everything
They touch
Until everyone
Around me
Shy away,
Leaving me alone
With the stench
Of my rotten heart.

I know
I should walk
With a warning sign
Hanging like a noose
Around my neck,
To keep all away
From the decay
In me, infectious
Unwanted
Diseased,
But somewhere
I dare to hope
That someone
Won’t hate me
For the darkness
And dark decay.

I know now,
How undeserving
I have always been,
Of the happiness
Most people receive,
And I know,
I was always a fool,
To long for the impossible,
To want something more,
For such things are given,
Only to people in the rainbows,
Never to dark souls like my own.

And now I have come
To accept this darkness,
Where I can hide
With my plastic smile,
And a knife in my hands,
To fend off all intruders,
I no longer wish for light,
As the darkness is my only friend,
And I know I am safe here,
From the turning of the world,
I have come to accept
My everlasting solitude,
And I long for nothing more.

The snow dances in spirals,
Easily carried away
By the folly of the wind
Like the naive heart
Gets trapped by a smile
Or the look of a friendly face.

The snow swirls in patterns
Sometimes lifted up like a bubble
And you can almost reach out
To capture a snowflake
Frozen in the air for a split second
Until the wind nudges it on its way.

This wintry silence is piercing,
Yet like a serene orchestra
You can feel it flowing
Through your very veins
And you are lost in a white trance
As the snow floats down from heaven.

Every flake sparkles in the light
As if the sky has become generous
And is pouring diamonds
You feel afraid to tread
Over this carpet of gemstones,
Lest you take away their shine.

But alas, you must walk
Through the wintry night
Pondering over all you have lost
And  you know nothing was worth
More than what lit you up with a smile
Not even the sparkles falling to the ground. 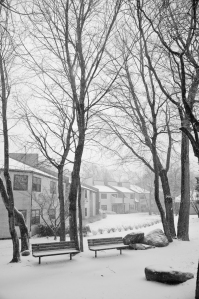 It was a whirlwind that caught us
And spun us round and round
Before throwing us back to the ground.
We found ourselves scattered
Our lives in complete disarray
And the pieces strewn helter-skelter
Taking us on roads winding and far away.

We always looked for adventure,
But of a peaceful disposition,
Unlike the storm that churned us out
Rampaging all in its path
Till the only solid form left behind
Was the shards of our broken heart,
Our shattered soul, and tired mind.

The pieces fit together like a puzzle,
And we knew we could build up
The house that was torn down
But the willpower was lacking,
And one of us gave up half way
While the other was left to pick up
The pieces, and wander alone.

There is no loneliness felt stronger,
Than that felt in the midst of the crowd.
And the mind is conflicted,
For often I long to be alone,
Especially if you’re nowhere to be found.
But when I hear the sounds of laughter
I sometimes want to be a different person.
I often think I am a contradiction
I wish for things I don’t like,
And throw away what is closest to my heart.
I puzzle over myself so often
I feel so torn sometimes, torn apart.
Sometimes I feel a strong instinct
To leave everything behind
To just catch a random bus to any city
With only a bag on my back
And disappear without having a second thought.

Then my daydreams come to an end
And I ponder, how much can I run?

A soft silence lingers in the wind,
As it winds along its destined path,
I walk under a veil of darkness
Shroud by the sound of an untamed sin.
And I listen to the leaves rustling
Around me like an orchestra
Threatening to sweep me off my feet
And down the chasms of space and time.

I don’t know where I am heading,
I do not stick to a worn out path
I am only wandering aimlessly
Searching for all that’s lost inside my soul.

The gravel sounds like a soft beat
Carrying forward broken bits of twig and leaf
My thought go randomly swirling
Into the dead of this winter night.
I’ve felt a hundred emotions
Steering me onto the road of insanity
But none have I felt more strongly
Than what I have felt in the depth of my heart.

Sometimes I get tired of feeling
I only long for an emptiness in thought
For everything only seems to overwhelm
And leave me lost in the chaos inside my soul.

I find myself running, running until I cannot be seen anymore…

The clock was ticking.

She looked up with quiet desperation in her eyes; an almost crazed, starved, empty look, as if all feelings had died inside of her. Long ago she had come to terms with the fact that she would not feel love for another human being ever again, as no one would love her in return. This was the thought which crossed her mind as she sat silently, waiting for the verdict.

He sat at the other end of the room, smoking a cigarette, gazing at her face, trying to understand the girl he fell in love with years ago. She was not like the other girls he had been with, she felt real, genuine, almost alive. For the first time in his life he had felt that he was with a girl who truly cared for him, and who was not just chasing after his money. How could eyes like hers lie to him?

Circumstances under which they had met flashed across her mind, she still remembered the vacant look his eyes held as he walked past her, hand in hand with a Barbie Doll. She wondered whether she had felt anything for him, but all her memories could bring back to her were her pretenses to get to him. Had he never aroused feelings of love in her heart of stone?

He searched for even the faintest trace of warmth in her face, but found nothing but cold indifference. What had he done to kill the soft warm glow of her eyes, the infinite depth of her smile? Could she be telling the truth about how she never felt anything for him, and only wanted his money? He had always known when a girl wanted him for his money, but this time he had been wrong, and this mistake could cost him everything.

“I love him, I love him not,” were the words playing in her mind as if they alone could decide her real emotions. Either she had felt nothing at all, or felt too much for him; either way, all she could do was let him down. She enjoyed the disappointment in his eyes, the hurt, painful look of a dog once much loved but now abandoned by its owner. Oh, the bottomless pit of betrayal.

He remembered the smile she gave him as she walked down the aisle in her white dress. The memory was almost a dream, from a life so far ago; it seemed so unreal. She always joked that life was a game, but he never thought she would play her cards so cleverly, hell, he did not even know she was playing cards at all. It was a tough move to judge, and her face was so expressionless.

The judge called order in the court, the verdict was out. She was to be allowed to keep the property, she had won. The divorce was granted. She got what she wanted. He looked at her face, she did not look happy, nor did she look unhappy. Her eyes met his for the flash of a second, and then she was gone.

The clock was ticking. Tick-tock tick-tock.

After a month of evening drinking, and morning hangovers, he received a note from her lawyer. She had returned his money, every single penny. Confusion was his first reaction, his second was a sense of understanding. He called her lawyer.

She sat at the airport, watching planes take off. A single tear slid down her cheeks, as she walked into life’s open arms.

I received the Perfect Poet Award for Week 39.  I would like to accept it, and I nominate Lynna for the next Award.

I also received The Celebrate Poet of Spring Award. Thank you to everyone who voted for me.

Here is my acceptance poem.

Standing In a room
Full of laughing people,
Friends I’ve come to know
And cherish with all my heart.

What more can one ask for?
Than these friendly smiles
The jokes and fun
And their caring shoulder to lean on?

Still sometimes I discover,
That no matter what,
No matter where, or with whom,
I am all alone in the dark.

Essentially and elementally isolated,
Broken and stitched up
Over and over again
I am but a child of solitude.

This is my world, my wintry madness. I hope the snowflakes leave a trail of lingering warmth as they slip off your skin…

Some days I look upon the sky, with a singing in my heart. Some days the singing turns in to voices I once sought. "Leave not, leave not!" in despair, my heart does always shout. Alas, in the end, you're gone my friend, in the end you've left without a thought...

"My poetry is too crude for refined thought..." -deadpoet

"The very existence seems to contradict the meaning of form. I am not a happy being, nor do I strive to be. What matters is irrelevant, what is, is pseudo-truth. Kill not the problem, but the root. But what if the root itself is my existence?"
~deadpoet